Let me tell you a story…

When I think back to my childhood, a memory sticks out very clearly. It was a warm summer day. I was playing in the backyard in my sandbox. To my right stands a swing set, and to my left a large red shed. My parents walk out the back door with something in their arms, a puppy. I jump for joy at the thought of having a dog and my brother sits gurgling making some sort of weird noise since he wasn’t old enough to talk yet.

Now, why am I bringing this memory up? Because most of it my mind made up…

Now, how on earth is it that I have a distinct memory in my head of a completely different set of circumstances? Even today it is hard for me to believe how wrong I was about all of the details of this story. I have no memory of it being Christmas when I received the dog, I still clearly remember a sandbox where there was no sandbox, and I can still see the red shed even though it had always been green.

The reason for this is that our memories are not actually that great. This isn’t a knock against the human mind but a truth that we remember what we actually need to remember and the mind fills in the blanks with what it believes to be the most likely scenario in any given situation.  The important portion of the story that I related earlier is that when I was young my parents bought me a puppy. Everything else surrounding that memory was deemed unimportant to my mind and so it simply played fill in the blank with the rest of the story.

This leads me to bring up something that each of us experiences from time to time in our lives, Nostalgia. Now one of the more interesting points about nostalgia is that at one point it was considered a serious mental disorder. People who suffered from nostalgia had a deep longing for the past, so much so that it could bring about crippling symptoms of depression and anxiety. Today we no longer see it as a mental disorder but I still say that it can have devastating effects on those who choose to live life through the eyes of nostalgia.

I grew up in the 1980’s during the Reagan administration. My parents, being staunch conservatives, raised me to believe that America had never before been better, and never would be better, than it was during the 1980’s. The truth of this matter is a mixed bag. The world did experience the end of the cold war which led to peace of mind for many who had lived under the threat of nuclear annihilation, but at the same time homelessness increased, wages lowered, and the economy took a major hit due to the failed trickle down policies of that administration. Thus the bright and shining 1980’s for my parents was the dismal and dank 1980’s for my grandparents.

“Make America Great Again” was the slogan of the Trump campaign and it was based entirely on the Reagan campaign of the early 80’s. A certain group of people do honestly believe that we were once greater than we are now and if we can only retake the reigns of society and hit the brakes on progressive reforms we will once again see our greatness shine. However this is 100% based on nostalgic feelings for a time that never actually existed in American history.

This nostalgia centers around the idea that America once took care of itself. We produced everything we needed, our factories were filled with workers, and everyone made more than enough money to raise a family on. The truth though is that the time period Americans are attempting to seek out wouldn’t have existed if not for the rest of the world. By this I am talking about WWII and the decimation of factories across Europe and Asia. When the other industrial nations were digging out from a horrific war, American business boomed. The war never touched our soil and so it was easy to begin manufacturing enough for both domestic customers and abroad. Unfortunately for the American worker, Europe and Asia rebuilt their manufacturing capabilities and when that happened our labor force took a significant hit.

So are these folks who wish for a return to the past also wishing a return of a horrific decades long world war which leaves the rest of the world incapable of producing anything? I sincerely doubt that. However without the same circumstances we cannot hope for a return of manufacturing jobs, which highlights my point, we are wishing for a set of circumstances that never actually existed apart from just after WWII. 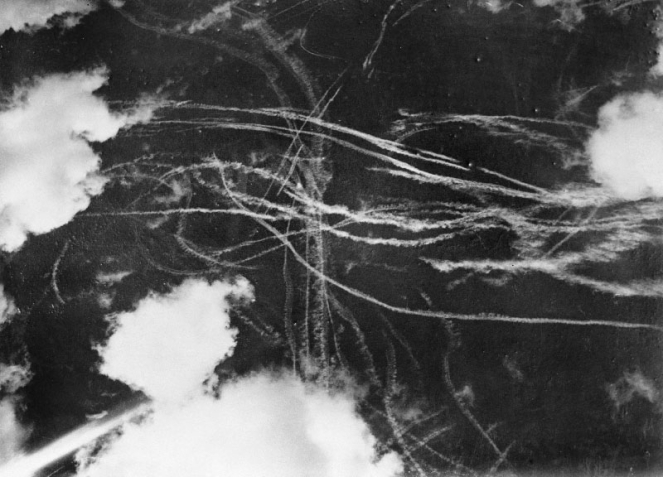 (Contrails left in the sky after the Battle of Britain)

Nostalgia can take on many other forms which lead the mind down dangerous paths. This on the sky when you were a child. What color is the sky? I would assume you think of a healthy shade of blue without a cloud in sight. Your mind doesn’t recall the contrails left by airplanes flying through the air and so you remember a clear and sunny sky. This leads many to make the claim that the government is using chemtrails to pollute the air, they will state confidently, “There weren’t any of these chemtrails when I was a child.” No, you don’t remember the contrails because your mind didn’t think they were important enough to remember.

Most of us have had the experience of breaking up with someone only to feel badly about the break up a few days later and wish it had never occurred. Maybe you were in an abusive relationship or know someone who was in an abusive relationship. You finally break free and yet for some reason we feel the need to reconcile with that person, knowing full well that things will not get better, but our minds attempt to trick us into believing that simply being with the person was better than not being with them.  This is nostalgia once again playing its wicked games with us or the person you know who went through this.

It has been said that “The past can be a wonderful place as long as you don’t stay there.” While our memories of certain events can be false, the lessons we learn from the past can stick with us forever. We should learn from the past and not yearn to retake what we believe once was. Humanities hope is in the future, in the advancement of scientific and medical knowledge, in the way we see our fellow humanity.  Let the past remain in the muddied waters of our minds and attempt to make the best possible future we can together.