Suicidal thoughts are a serious issue and should be dealt with by the help of a psychiatrist and most likely medication. Let me just say that anyone who is actually considering this should seek help, and I do not want anyone to think I am making light of a bad situation. People who have followed this blog will know that my struggles with faith began with the suicide of my cousin. Please, if you are suicidal, seek help. Suicide Prevention Hotline: 1-800-273-8255

Good Evening Heathens and Hell-Bound friends and foes alike. First off I would like to thank Genetically Modified Skeptic for providing me with the idea for tonight’s article. If you haven’t checked him out, please do so and definitely subscribe to his channel. Also, if you’d like to read the last article in this series, click here: Bad Theism: Angels

So tonight I want to talk a little bit about melodramatic bullshit. We’ve all seen this argument from time to time,

“If god didn’t exist there would be no reason to go on.”

It’s another one of those platitudes that theists love to use as an excuse for their continued belief, even in the face of mounting evidence against their claims. Well, tonight I’d like to tell you it’s absolute bullshit and if it’s true then these people already need psychological help.

Another great example comes in the form of a comment, posted on this brilliant video created by Genetically Modified Skeptic.

The video is obviously meant to be satire and just to have some fun with some of the arguments that apologists use in support of their claims. However, take a look at this comment. 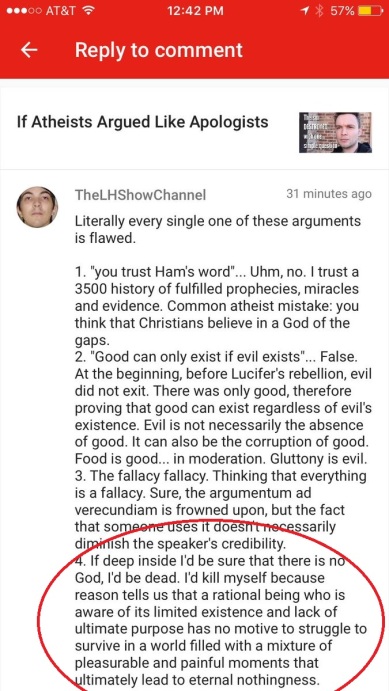 I’m not even going to touch on points 1-3….ok maybe a little…I’m a glutton for punishment.

Point 1: Can you name one prophecy or miracle that is supported by actual verifiable evidence? Has any of your evidence been verified by the scientific method?

Point 2: According to your scriptures, is Satan able to create anything? If Satan cannot create anything then how could he create the concept of evil? Who created Satan?

Point 3: An Appeal to Authority doesn’t necessarily negate the argument given but only if the authority that you are appealing to has proven the point in a satisfactory nature, meaning provided verifiable evidence to back up the claim that you are attempting to defend. Since god has not even proven himself to exist with verifiable evidence, any appeal to his/or her authority can be automatically dismissed in an argument.

Now that we have that out-of-the-way, what I really want to talk about is the comments 4th point. 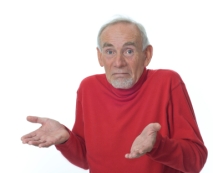 All I did was quit the ministry and start blogging, perhaps I was doing it wrong???

Truth is, I really don’t think he would kill himself, and if you really want to know, I think he’s already on his way to becoming an atheist. I’ll let you in on why I believe that later.

When I was in high school I was in an incredibly abusive relationship. I didn’t have a lot of confidence at the time and so I put up with it. The main reasoning for this was that it was better than not being in a relationship, at least by high school standards.  However, I could only put up with it for so long, and when I finally broke off the relationship, my ex said that she was going to kill herself. She did not and is still living today.

When I told my ex-wife that I was leaving, she told me that she would kill herself. Going so far as to shave her head and get herself committed. Once again, she is still alive and thankfully far away from me.

Here is what happens when the very religious begin to doubt the existence of god.

Now I’m not saying there has never been someone who committed suicide after losing their faith. Depression can cause even the best of us to question the value of life, I’ve struggled with depression for most of my life. However I’m still here.

Theists like to promote the idea that without god there would be no purpose to this life, but life is filled with a plethora of things to bring us purpose. I have numerous friends who are atheist and they all find ways to give purpose to their lives. Some are YouTubers, others are photographers, some are foodies, artists, musicians, sculptors, writers, podcasters. Many atheists are highly charitable and find ways to help others, giving back to their community and making the world a better place. They all live life with purpose and I would say that the majority of them are pretty content with their lives.

My cousin committed suicide just a week after he got saved in my church. God did not grant him purpose, he wasn’t filled with a blissful spirit that led him to embrace life. He took a shotgun, put it in his mouth, and pulled the trigger.  Purpose is not found in god it is found within ourselves, in what we choose to spend our time and energy on.

Theists also like to claim that without god, we would all live in a chaotic world where murder, rape, and Justin Bieber dance parties would be the norm. I think Hitchens puts it best in the following video.

The idea that we can only have morality with god is preposterous.  I would lay claim that I am much more moral, now, since I left the faith than I was when I was a still a minister and a believer. You want to know why I say this? It’s actually quite simple.

When I was a believer and I did something wrong, I would pray for gods forgiveness and then feel better. I no longer have that security blanket to make me feel better about the mistakes that I make. Instead, I simply try to not do anything that I should feel bad about later.  If I do something that hurts another person, I don’t ask god to forgive me, I seek out the person and tell them how sorry I am for having hurt them.

Atheist in the Making

Lastly, do you remember when I said that I believe the author of the comment is already on the way towards atheism?

Well here is the case that I’d like to submit.

When I began to have my doubts I started acting even more religious. I fasted more, I prayed more, I read the Bible more, and I made idiotic comments online arguing for my faith. I was the worst of the worst when it comes to bad internet apologist trolls. I used every bad argument that you can think of in an effort to feel as if I was doing something good for god and that he would reward me by strengthening my faith.

I don’t think that I was unique in this aspect.

I honestly believe that a lot of people are like I was not so many years ago. Their faith has been waning for some time and so they are desperately doing anything they can in an effort to restore their faith. They sink deeper into their delusions and try their best to rationalize their faith in the most absurd of ways. They say that atheists have no purpose, no morality, and that without god they would kill themselves.

I know this, because I said this. When I was a theist I remember clearly saying that if I found out that there was no god, I would kill myself. I’d have no reason to live, no purpose, and I would choose to end it all. Life is a struggle and why would I put myself through this struggle if I didn’t know that I was on my way to heaven?

My purpose is still to help others. I was a minister not because god called me but because I earnestly wanted to help people. I love causing people to laugh, making people think, and being able to be there when I am needed. Learning is my passion, I read voraciously and absolutely love a good documentary on just about any subject. I love my family and want to see my children grow up and have kids of their own. I want to grow old with my wife and enjoy her company for as long as possible.

My purpose is what I say it is, and that’s why I’m still here.