Good Evening Heathens and Hell-Bound friends and foes alike. It’s time yet again to provide you with what I consider the best videos that I watched this week. I hope you enjoy them, share, and subscribe to these great channels. Holy Crap it was an awesome week for videos!

#7 Jackson Wheat: Evolution of the Flagellum

I find this video fascinating. Learning about evolution thrills me to no end and Jackson Wheat does an incredible job! I was introduced to his videos just this week and I wish I had learned of him sooner. Check out some of his other videos and please subscribe if you enjoy them.

#6 Rationality Rules: The Atheist’s Burden of Proof – Debunked (And the Definition of Atheism)

Rationality Rules debunks, though it won’t do any good, the idea that theists attempt to promote: That atheists have to prove god doesn’t exist. He does a great job of pointing out that it matters who is making the claim, not necessarily what the claim might be.

#5 The Bible Skeptic: What Genesis Got Wrong: Part 1

The Bible Skeptic is just an excellent video maker. His videos have a quality to them that are just astoundingly beautiful. They will remind you a lot of classic PBS Documentaries. Incredibly informative, lots of visuals, and a Ken Burns style presentation. I hope you will give this channel a view.

#4 Godless Engineer: The State Of Atheism in 2018 With Red Pill Religion

Logicked does an excellent job in this video of debunking the idea that faith trumps doubt. It’s also hilarious which is a big plus. Check it out!

Ok, so let me let you in on a bit of a secret, I’m somewhat of a germophobe, I’m much better than I used to be, but religion has some really gross traditions. EWWWWWW!!!! This is a great video that exposes some of the worst of the worst, and grossest, traditions in the faith. Also MAJOR bonus points for mentioning Ric Flair and Mick Foley!

Though he didn’t make video of the week this time, I’m sure he will totally understand. This video is amazing and if it weren’t for GM Skeptic and Anti-Ordinary, one upping him and going for my feels, he would have had his three-peat.

Video of the Week: Genetically Modified Skeptic: I’m and Atheist Activist in the Closet

Wow, just wow, it’s pretty surprising that such a well-known atheist on Youtube is in the closet when it comes to his friends and family. This makes the video of the week because, while I’m not necessarily in the closet, none of my family or co-workers really know how much I do when it comes to activism, and so I really relate to this video. Thank you so much for sharing this!

Video of the Week: Anti-Ordinary: The Problem With Karma!

That’s right, there are two videos of the week, deal with it. I honestly could not decide between these two videos. Anti-Ordinary provides a truly emotional story that leads us to truly question the healthy nature of a belief in karma. Thank you so much for sharing your story it really touched my wife and I.

For fifteen years I was a part of a very strict Pentecostal church. During this time I was not “allowed” to grow a beard, watch television or listen to non-gospel music. Once I became a preacher, short sleeves and coming to church in anything other than a white shirt and tie became a sin. My wife and two daughters did not cut their hair, wore skirts to their ankles and make up was out of the question. Let’s not forget, if you make two dollars you better pay twenty cents in tithes and give another 10 to 15 cents for offering (after God will provide).

“But you are a chosen people, a royal priesthood, a holy nation, God’s special possession, that you may declare the praises of him who called you out of darkness into his wonderful light.” – 1 Peter 2:9 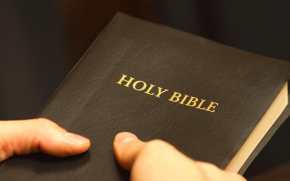 These people actually believe they are correct and that the Bible means exactly what they think it does because God has given them a special revelation because they are his chosen people ( 1 Peter 2:9). They seem to think that if they can find a scripture that could possibly be interpreted as what they believe then that is a god reason to create a holiness standard or make a heaven or hell rule to dictate the behavior of the church. A perfect example of this is when 1st Corinthians 11 says that it is a shame for a woman to be shaven or shorn, hence Pentecostal women do not cut their hair. Could it possibly be that since temple prostitutes shaved their heads that Paul was advising women not to be mistaken for prostitutes? This is an example of Pentecostal and fundamentalist in general taking what was actually good advice and using it to exert the fear factor over their congregations.

They also believe that God should get the glory for everything and that we should be” hid in Christ” (Colossians 3:3). What happens here is that God gets all the glory for anything that you accomplish and your self-confidence is shattered because you are taught that without God you are nothing and can do nothing on your own. As a matter of fact you were born into sin (Psalm 51:5) and in order to enter the kingdom of heaven you must be born again ( John3:5) because obviously you were not born good enough the first time.
Overall, these” Christians” use scriptures to explain why their ways are above your ways (Isiah 55:8-9).

When I was twenty-six, I attended an Apostolic Pentecostal Church service attempting to find some meaning and order for my crazy addiction filed life. At first it was great, I was welcomed in the fold and began attending every service, Bible study and prayer meeting. About a year later, I met and married a woman from church and started a family. I was told I was called to be a preacher and the journey began.
Long story short, the more involved we became the more we realized that we were nothing but Pentecostal Pharisees and that unless you were one of us you could not be saved ( and some of us were in question ). It took fifteen years but we eventually left that church in search of something more genuine.
After trying a couple of different churches and preaching a few times, we realized that the life we were trying to hang onto was based on people interpretations of things that had little to no evidence of being true.
After cutting all ties with the church world I returned to school and received my BA and Communication Studies and I have realized that the world is a whole lot bigger than any religion allows it to be portrayed.